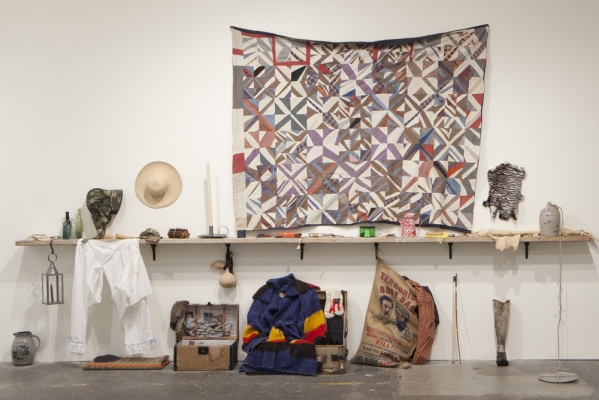 For this commission for the Wattis Institute, I proposed to recreate the detailed inventory of objects listed by Huck Finn in Chapter 9 of Mark Twain's famous novel, “lots of things around about on the floor” of the house that he and Jim found floating in the flooded Mississippi river. This compelling list of material objects or props suggests multiple narratives, metaphors, and meanings. Most importantly, though, these are the things that surround the dead body of Huck Finn’s abusive father, the reality of which he is temporarily spared thanks to the protective discretion of Jim. Huck’s detailed observations stand in contrast to his blindness toward the corpse, almost as if he is distracting himself (or Twain is distracting the reader) from the truth. It is in this chapter that a bond begins to form between Huck and Jim, and Jim is revealed to be both a caring family man and a compassionate friend to the young Huck. Although Huck’s narration is upbeat and even humorous at times as he and Jim loot the house, the undertone is ominous, the context of a floating house resonating with media images of the aftermath of Hurricane Katrina.

For this piece, I was thinking about “historical reproductions” and as such, I wanted to blur the line between objects that could be read as old or new, handmade (by me) or commercially produced. I gathered the objects while traveling up the Mississippi River from New Orleans to Chicago during the summer of 2010.

Here is the actual text from Chapter 9 of The Adventures of Huckleberry Finn:

I didn't look at him at all. Jim throwed some old rags over him, but he needn't done it; I didn't want to see him. There was heaps of old greasy cards scattered around over the floor, and old whisky bottles, and a couple of masks made out of black cloth; and all over the walls was the ignorantest kind of words and pictures made with charcoal. There was two old dirty calico dresses, and a sun-bonnet, and some women's underclothes hanging against the wall, and some men's clothing, too. We put the lot into the canoe — it might come good. There was a boy's old speckled straw hat on the floor; I took that, too. And there was a bottle that had had milk in it, and it had a rag stopper for a baby to suck. We would a took the bottle, but it was broke. There was a seedy old chest, and an old hair trunk with the hinges broke. They stood open, but there warn't nothing left in them that was any account. The way things was scattered about we reckoned the people left in a hurry, and warn't fixed so as to carry off most of their stuff.

We got an old tin lantern, and a butcher-knife without any handle, and a bran-new Barlow knife worth two bits in any store, and a lot of tallow candles, and a tin candlestick, and a gourd, and a tin cup, and a ratty old bedquilt off the bed, and a reticule with needles and pins and beeswax and buttons and thread and all such truck in it, and a hatchet and some nails, and a fishline as thick as my little finger with some monstrous hooks on it, and a roll of buckskin, and a leather dog-collar, and a horseshoe, and some vials of medicine that didn't have no label on them; and just as we was leaving I found a tolerable good curry-comb, and Jim he found a ratty old fiddle-bow, and a wooden leg. The straps was broke off of it, but, barring that, it was a good enough leg, though it was too long for me and not long enough for Jim, and we couldn't find the other one, though we hunted all around.

And so, take it all around, we made a good haul…