"Fuller Craft Museum presents Another Crossing: Artists Revisit the Mayflower Voyage, an exhibition recognizing the 400th anniversary of the Mayflower crossing and its significance to American and world history.

Developed in partnership with Fuller Craft Museum, Plymouth College of Art, and The Box (both in Plymouth, England), Another Crossing brings together ten artists from the United States and Europe for a global, cross-cultural effort that examines a pivotal event in world history.

In 2018, guest curator Glenn Adamson selected ten artists to participate in the project with the charge that only 17th century technology and processes be used in the creation of the objects. To fuel and inspire the work development, the artists and project partners participated in two research trips­—the first to Plymouth England in March 2019, followed by Plymouth, Massachusetts in April 2019.  These immersive experiences created a sense of communion amongst the artists while providing important scholarly and technical information to inform the development of the work.

These resulting artworks illustrate exceptional technical skill, while also speaking to the social realities behind the material culture, and the examination of the Mayflower crossing through a contemporary lens. For some, the Mayflower voyage and subsequent settlement of Plimoth Colony is a treasured historical event, while for others, the colonization and treatment of the Wampanoag peoples illustrate imperialism and cultural ruin. Through Another Crossing, the artists responded to this complex part of our history and its impact on our culture over the last four centuries.

Another Crossing: Artists Revisit the Mayflower Voyage is offered in conjunction with the initiatives of Plymouth 400, a non-profit organization created to highlight the cultural impact of this 400-year anniversary through exhibitions, programming, and other relevant events." -- press release

See a virtual tour of the Fuller Craft Museum exhibition here.
Another Crossing 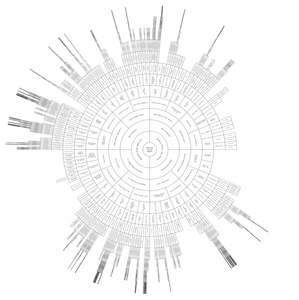 Graphic representation of Smith's ancestry since the early 1600s, an attempt to see clearly a holistic portrait of the entirety of the artist's ancestors-as-not-from-here who were impacted by the loss of their previous cultures and who forever impacted other cultures when they crossed over to Turtle Island/North America. 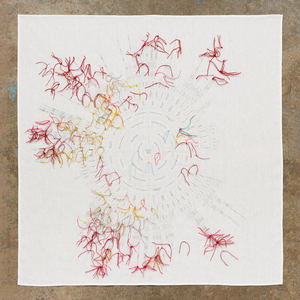 Inspired by alchemical diagrams, compass rose navigational motifs, and genealogical descendancy mapping, this convergent diagram charts all of the names (known as of the year 2020) of Smith’s blood ancestors: over 400 years and 13 generations, since the early 1600s, and encompassing the period of ongoing colonization of Turtle Island/North America. Smith uses this to chart various troubles, such as traumas or violence inflicted or experienced, using woolen threads. Dark red threads, for example, denote the generational point at which direct ancestors crossed over from Europe to North America, breaking with past cultures and disrupting others. 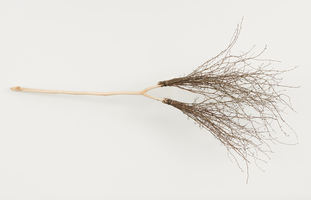 Smith’s double besom witch’s broom consists of materials gathered from sites of ancestral departure and arrival. The broomstick was made from an elderberry branch pruned by groundskeepers at the gravesite of Smith’s ancestors Joane Franklin and Roger Sumner who are buried at St. Edburg’s church yard in Bicester, England. The Anglican church, built upon an ancient pagan ritual site, is where they married, baptized their son William and attended his wedding. William and his wife Marie migrated to Dorchester, Massachusetts Bay Colony, in 1630, making them the earliest arriving ancestors known to Smith, and making the church one of their last known points of departure. The broom’s bristles are mayflower (hawthorn) gathered by Sleepy Hollow Creek on Me-Wuk (Coast Miwok) lands in California not far from where Smith currently resides. 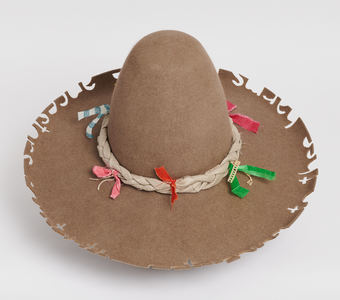 This self-styled “witch hat” closely echoes the beaver steeple-crowned hat attributed to Mayflower passenger Constance Hopkins, who was Smith’s 10th great-grandmother’s half sister’s sister-in-law. Mimicking the chipped edges of the original artifact, it is cut with the words “constantly returning to thee harms of mine ancestors,” a phrase that can be read starting with any word, circling the perimeter of the brim. To make this hat Smith hand turned a solid poplar hat mold on a lathe in California. Beaver fur sourced in the Canadian provinces was felted in Tennessee, then blocked and hand stitched in Utah using the mold. While the band on the original has been lost, Smith added a braided band tied with linen knots and plain (possibly 19th or 20th century machine-made) tape lace based on a 17th century bobbin lace pattern--and likely containing ancestral DNA-- found in their archive of family textiles. 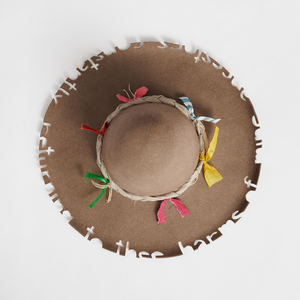 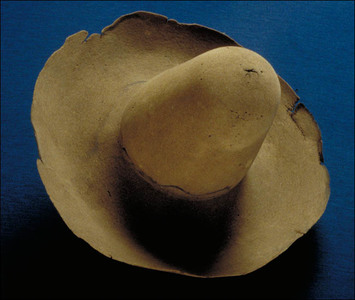 Steeple-crowned hats, usually with a decorative band, were popular in Western Europe for both men and women in the early 17th century. Beaver fur, imported from the colonies, was processed into felt to make hats. Source: https://pilgrimhall.org/ce_17_century.htm 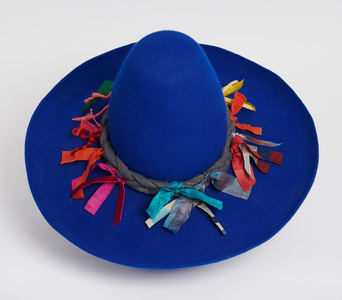 This self-styled “witch hat” closely echoes the beaver steeple-crowned hat attributed to Mayflower passenger Constance Hopkins, who was Smith’s 10th great-grandmother’s half sister’s sister-in-law. To make this hat Smith hand turned a solid poplar hat mold on a lathe in California. Rabbit fur was felted in Tennessee, then blocked and hand stitched in Utah using the mold. While the band on the original has been lost, Smith added a braided band tied with linen knots and plain (possibly 19th or 20th century machine-made) tape lace based on a 17th century bobbin lace pattern--and likely containing ancestral DNA-- found in their archive of family textiles. 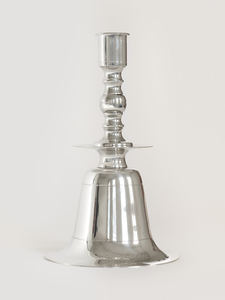 This ritual object, based upon a rare English pewter “high-bell” candlestick circa 1600-1620 is a magical tool meant to “summon” Smith’s English ancestors of the Sumner lineage. When William Sumner migrated to New England in 1630 he was a farmer, however within a few short years of his arrival in the Massachusetts Bay Colony, he held a series of offices, including summoner for the courts. 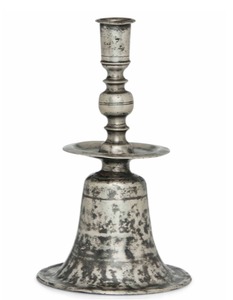 With a knopped stem and dished drip tray, decorated with bands of incised turning. An old typed label under the bell-base reading 'This candlestick was dug-up in a flowerbed outside the ruins of Glastonbury Cathedral by our mother Edith Cole Pardon (Mrs Harry Petter) about the turn of the Century (1900)' Mrs Petter emigrated to Canada where she died in 1918, and the candlestick has remained in the same family ever since. It can be compared with a similar example sold Christie's London in the David Little collection of 'Important early English pewter' 1st May 2007, lot 132, formerly in the Peal collection, and illustrated in various publications by Peal, Hornsby and Michaelis.
A similar candlestick is illustrated by Eloy Koldeweij, The English Candlestick, p.65. Cat No. 32. and similar in Michaelis, Old Domestic Base-meal candlesticks, figs 86-90. Source: https://www.christies.com/en/lot/lot-5850826 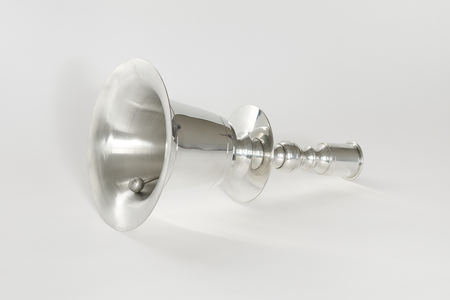 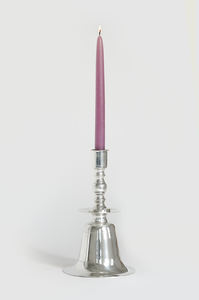 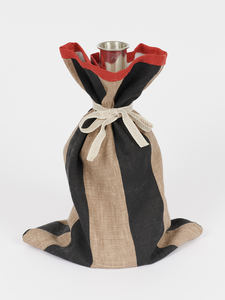 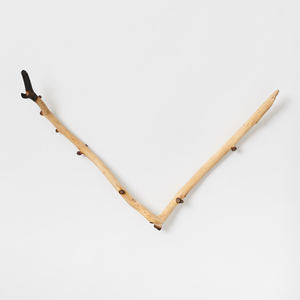 This magic wand consists of a naturally bent elderberry branch gathered at the gravesite of Smith’s ancestors in Bicester, England. Atypically bent at a right angle, the wand is queerly doubled with a carved hand at one end; it speaks to the Law of Returns, which states that the energy a person puts out into the world, be it positive or negative, will be returned to that person amplified. 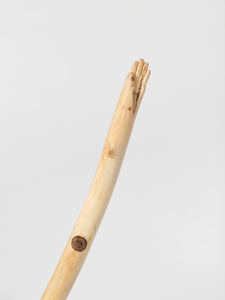