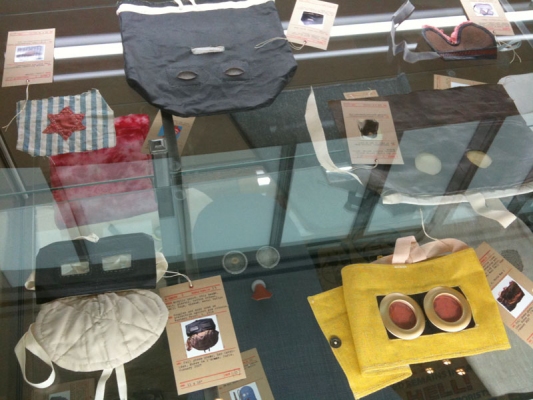 This body of work emerged from a series of photographs of early cloth gas masks that I had been taking in European and American military history museums. I was struck by the haunting, almost ghoulish quality of these objects and their visual equivalence to other kinds of masks, hoods, costumes, and veils. I was also attracted to their handmade quality, which seemed to suggest simultaneously a level of loving care as well as functional inadequacy. I began to see these objects as remnants of an as-yet unwritten history of needlework. The repeated thought that “someone made this” compelled me to recreate many of the masks, and to expand my search to kindred forms found on the Internet. I used out-of-focus, poorly lit, and pixilated images as the source material for making my own, flawed “authentic reproductions,” using art supplies found at local fabric/craft retail stores and recycling centers. In my version, each accessory is plainly stitched, unspoiled, stain-free, and ready to be used. I was thinking of this process as a kind of performance, akin to that of the seamstresses who supply the material culture for the field of Living History, a cultural phenomenon as well as a popular pastime in which the “art” of war is perpetually reenacted. This form of making-as-performance in my studio was then followed by the performance of the articles in a series of staged photographs, both portraits and tabletop still lifes, in which things that perhaps we would not think of as having been made by someone are caught in the act of their making and wearing. This handle-ability, or materiality-as-process, was emphasized by the hands as they engaged the provisional immediacy of props to demonstrate acts of survival, cruelty, modesty, disguise, or fetish. I chose the title Needle Work to suggest a kind of creative process that might get under the skin: to goad and to provoke as well as to labor over lovingly, and with precision.


"In 2009, the artist Allison Smith produced Needle Work, a body of work that took its initial clues from Smith's interest in looking back onto the material culture of World War I and II, and specifically to the homemade gas masks that people made to protect themselves both on the front lines and during urban air raids. Unlike uniforms, artillery, and other bits of material ephemera generated from these wars, these largely ineffective and somewhat folksy devices have evaded formal collection. Instead, like the hoods used at Abu Ghraib, their traces are primarily deposited across the internet and in museum archives in the form of haunting, low resolution photographs. Despite her lack of direct access to these objects, and armed with the knowledge that their original creators sourced most of their materials from in and around their homes, Smith challenged herself to reproduce these masks using whatever everyday materials seemed to best approximate the masks' textures and forms, as they appeared in the grainy photos. [...] When installed, viewers are quick to connect the materials that make up Smith's recreation masks to contemporary, everyday material culture. [...] Needlework stands as a reminder that 'we' are all implicated in the horror of war; that many of the comforts we experience on the home front provide the textures of violence that others are subjected to on the battle field." -- Nicole Archer, Women and Performance 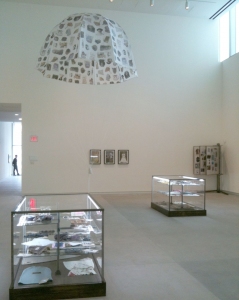 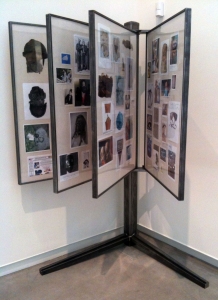 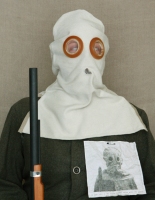