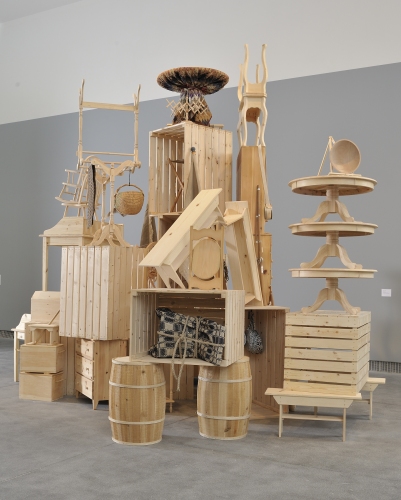 Stockpile is a large work comprised of objects and materials suggesting early-American colonial craft reenactment and reproduction. AMong them are included familiar forms such as crates, barrels, and baskets, pieces of unfinished wood furniture for domestic interiors and campsites, a spinning wheel, flags, drums, canteens, and wooden guns. I see this work as a campsite or period room turned in on itself, in which objects for the home and battlefield form a collected pile of loot, perhaps held in reserve for use at a time of shortage or emergency.

In my use of primarily unfinished wood, I wanted to suggest a "blank canvas" as well as a campfire or funeral pyre. The objects appear to be new and ready to be used, like props for a reenactment. I wanted their accumulation as a sculptural mass of this scale to evoke a sense of anxiety or paranoia, if not obsession. Aside from the question of how these objects are to be performed and by whom, this work also asks "Who made this?" Many of the items embedded in the piece were in fact made in Thailand, Malaysia, Vietnam, India, Brazil, and China, bringing these colonial reproductions full circle from their historical referent to current issues of American mass consumption and outsourced labor, perhaps a form of colonialism reenacted in the present.


"Allison Smith's [...] Stockpile [...] is a mountainous mash-up of objects evoking colonial-era Americana and its reenactment -- a pile (or pyre) of looted, stacked bric-a-brac teetering toward the heavens. The repeating forms of barrels, roll-top desks, Windsor chairs, cabriole-legged tables, and wooden guns, all made from the same unpainted wood, suggest at once the cut-and-paste reproducibility of the digital realm, the outsourced mass-production of 'historic' American artifacts (thanks, in part, to the cheap labor and unprotected forests of Asia), and an obsessive desire to cling to the elements of an imaginary past. With Stockpile, props from the waking dream of reenactment culture -- particularly the 'living history' villages of the eastern United States, [...] form a monument to national anxiety, a horror vacui born of an empire in decay. A dam to block the flow of time's river, Stockpile reflects a desire to stave off the advance of history, to live securely and eternally within the realm of repetition. In this way, Smith's practice can be said to embody a set of impulses that animates collecting of all kinds." -- David Spalding, Haines Gallery
Stockpile 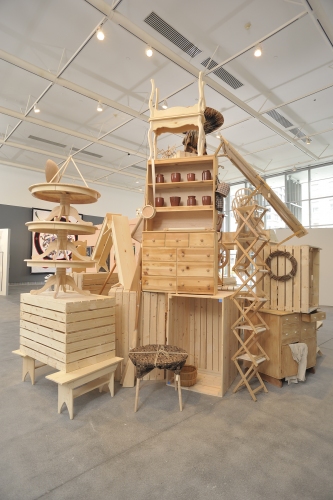